Where is the God of history in this pandemic? 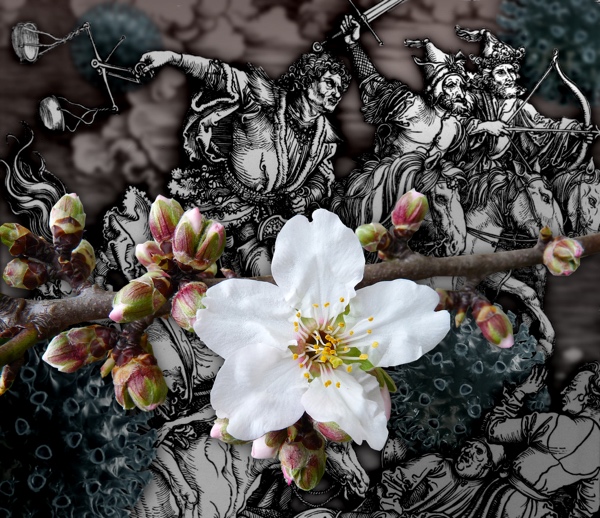 Enough of Steve Chalke’s book, let’s get back to coronavirus. How do we talk about it theologically? Or, as Baptist theologian and ethicist Roger Olson asks, “Where is God in this pandemic?”

Coronavirus is not one of the four horsemen of the Apocalypse—that was a very different future, from a very different perspective. Lament may well be appropriate, but at the social or political or global level lament presupposes failure, entails repentance, and looks to God to act to put things right. Lament demands that we speak out.

The challenge is to tell the whole modern story in a way that allows continuity with the biblical story, interprets the ballooning crises of globalisation, and gives presence and voice to the living creator God, who must be for Christians the God of history.

So here are a couple more biblical perspectives.

Unless you repent, you will perish

Reacting strenuously to Tom Wright’s reluctance to present Christian answers to coronavirus, Dan Phillips argues that the pandemic, along with a lot of other things, is a sign from God, which says loudly and clearly: “Unless you repent, you will perish.” I don’t think Jesus meant his statement to be taken in quite that sense, but the passage has some relevance.

Referring to a number of Galileans killed by Pilate’s soldiers in the temple and eighteen residents of Jerusalem killed by the collapse of a tower in Siloam, Jesus makes the point that they were not worse sinners or offenders than all the other people living in the city (Lk. 13:1-5). Nevertheless, unless they all repent, they will all likewise perish.

The context is obvious. This is about violence in Jerusalem: people are killed by Roman soldiers or by a falling tower. Jesus is warning Israel that if the nation does not repent of its longstanding apostasy and injustices, the whole population, give or take, will perish in exactly the same way when the city is besieged and destroyed by the invading armies of Rome. Some will die by the sword, others will die in the demolition of the city.

Today it is not Rome or any other empire that is fighting back, it is the whole natural order. It is the “wrath” of nature, so to speak, that is signalled by the coronavirus pandemic.

That was a particular localised historical warning. Jesus was not saying that all humans would figuratively “perish”—or suffer in “hell”—if they did not repent of their sins and believe in him. That’s well beyond the purview of the Synoptic Gospels.

Today we are confronted with our own particular historical crises, but they are not localised, they are globalised; they do not threaten God’s people alone, they threaten humanity.

Perhaps, then, a prophetic voice today—inspired by scripture, as Jesus was inspired by scripture, but conscious that history has moved on, as Jesus was conscious that history had moved on—could say that the people who are dying of Covid-19 are not worse offenders than the rest of humanity, but unless we all repent of our greed, our addiction to growth, our stupid, complacent disregard for the ecosystem that sustains us, as a society we will be subjected to far more serious devastation and disruption.

Why would we think that the function of prophecy as theological commentary on major historical events has changed?

When Roger Olson considers whether coronavirus is God’s judgment on humanity, he expresses scepticism. But he highlights two areas of sexual ethics—abortion and gay marriage—as the “obvious” reasons and asks how any preacher would know that. His own view is that we simply live in a fallen world and such things are going to happen.

Personally, I do not believe that pandemics are directly God’s judgment, but with my theological mentor Wolfhart Pannenberg I do believe that they, together with all calamities, point to God’s absence.

In other words, he rejects the arbitrary moralising connection with abortion and gay marriage and falls back, like Dan Phillips, on a highly generalised and supra-historical theology of personal sin and salvation.

But what Jesus says falls between the arbitrary and the over-generalised. He saw a real, politically meaningful connection between Israel’s behaviour and the predicted catastrophe of the war. His people actually were walking blindly along a broad road that would inevitably lead to destruction. The crisis was non-arbitrary and historically specific.

I can understand the reticence of Wright, Phillips and Olson to highlight behaviour. We don’t want to point the finger at any particular group of people and blame them for the pandemic. But the question is how do we point the finger at all of us? How do we talk about our collective responsibility?

Jesus shows us how. Of course he does. The model just needs scaling up.

The pandemic may or may not be a consequence of pressure put on the natural environment. But either way, it may be taken as a sign of worse to come. Of the two tragedies to which Jesus referred one was a direct instance of Roman violence, the other was accidental and not directly or causally related to the war. The emergence of a novel coronavirus at this time may be an isolated event, but it has given us a disturbing foretaste of the economic and social disruption that is likely to come with runaway climate change and ecological ruin.

The destruction of Jerusalem and the temple in AD 70 can be explained historically: the Jews chafed under foreign rule; inspired by messianic hopes they rose in revolt against Rome; but the revolt was crushed and Judea brutally punished by the army of Vespasian. Many Jews, however, including Jesus and his followers, understood the historical process to be a manifestation of the “anger” of the covenant God towards his rebellious people.

Today it is not Rome or any other empire that is fighting back, it is the whole natural order. It is the “wrath” of nature, so to speak, that is signalled—literally or figuratively—by the coronavirus pandemic. But if we believe that the God of first century Israel is also the God of the whole world, the God who crafted our little planet and hung it in the cosmos, then why not say that the natural process is a manifestation of the “anger” of the creator God towards humanity?

In this respect, however, there is perhaps a more appropriate Old Testament analogy….

A sabbath for the land

God gave the land to Israel as a new creation in microcosm, in the midst of the nations. But the land remained a gift, and Israel’s possession of the land remained dependent on Israel’s behaviour. If they walked in YHWH’s statutes and observed his commandments, the land would be fertile, they would enjoy peace, they would be fruitful and multiply, and the God who brought them out of Egypt would walk among them (Lev. 26:1-13).

But if they neglected the commandments and spurned the statutes, they would suffer wasting disease, fever and pestilence, drought and famine, the loss of livestock, military invasion, the destruction of cities and sanctuaries; Israel would be scattered among the nations, and the land would be devastated (Lev. 26:14-33).

For the land, the exile of Israel to Babylon was good news. Israel had long disregarded the commandment to observe a sabbatical year, when the land would fall fallow and be allowed to rest (Lev. 25:27-7). Israel had over-exploited and exhausted this fragile creation in microcosm in the midst of the nations. The sudden enforced depopulation—again, a simple historical event—meant that the land had a chance to recover:

In the last few weeks, under lockdown, the global environment has had some respite. Pollution levels have dropped, waterways run clear, and wildlife has been venturing into towns and cities, wondering what has happened to us. The macrocosm has had a chance to recover—or at least to demonstrate to us tangibly, marvellously, how good a thing recovery would be.

Something to celebrate at Easter, surely?

But I also wonder if part of the prophetic message shouldn’t be a call to observe a global “sabbatical year” in some form, when production and travel are reduced to a bare minimum, when we stay local, spend time with families, exercise regularly, applaud health professionals, garbage collectors, and supermarket workers, and so on—before nature again forces it upon us.

Impractical? Of course. But when was prophecy ever practical?

Thank you for taking the time to do this, Andrew. Really appreciated.

I enjoy your thoughts and am enriched.
I have to preach Easter in a streaming service. Thank you for your template, I’m going to shoot you in goal.

Especially the translation brings of course many interpreters deep decisions. How do you think he meant it? There are always blurred and specific translator decisions…

and so even your text in German will always be an interpretation :-)

here is a very stimulating reflection, which you can think about further. It is one of the mainstream theologies, but thorough and comprehensive.

A new course: Understanding and Practising “Missional Church”
What Jesus has to teach us about our response to the climate crisis
The Apocalyptic Symbolism of Mark 8:38 and (not) the Final Reign of God
Societal collapse, deep adaptation, and an agenda for mission
Multifaith Matters podcast: my conversation with missiologist Michael Cooper about the narrative-historical method
What is the essence of Christianity?
How does the New Testament predict the future?
Who will be taken? Who will be left behind? Darn it, we’re all too late anyway!
END_OF_DOCUMENT_TOKEN_TO_BE_REPLACED